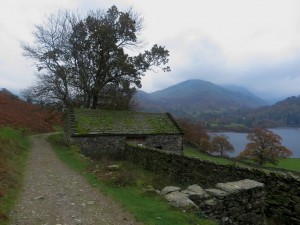 This walk was my first ever visit to the fells on the eastern side of Ullswater. It was also the first day on the fells of a weeks holiday so I was fresh and full of enthusiasm when I set off on a route taking in a handful of fells from Pooley Bridge to Patterdale where my bed for the night was waiting.

I arrived at the start of my walk in Pooley Bridge on an early morning Stagecoach 508 bus from Penrith. I’d been through the small village before but never stopped to look around, so before my walk started I had a look around the small village which sits at the northern end of Ullswater.

After a short wander down to the River Eamont which is the outflow from Ullswater – I’d be crossing the river that carries water into Ullswater at the end of the day – I walked back through the village, which really is quite small but does have a post office, hotel and a few eateries of various kinds.

I started out by heading east along a residential road named High Street (I presume for geographic rather than economic reasons) and came to a crossroads on the edge of the village. Taking the road to the right here would have resulted in a quick walk to Martindale along the tarmac lane and probably would have had good lakeside views for much of the way. However I had a more strenuous day in mind so I headed straight over and towards the fells.

The country lane becomes a wide and stony path at Roehead. It continues on and past Moor Divock and Askham Fell, but I followed only a short way before taking another path towards The Cockpit, an old stone circle on the fell side alongside the High Street (The Roman Road, not the street in Pooley Bridge).

After reaching The Cockpit my attention turned towards the summit of Arthur’s Pike. A well used and grassy path traverses the side of Barton Fell, often with views down to the side of Ullswater, along the lake and across the valley to fells on the western side of the water.

After a straight forwards walk across the grassy fell side the summit of Arthur’s Pike is reached. The top of the fell is marked by a mid sized, roughly made cairn.

The route from Arthur’s Pike to Bonscale Pike involves a circuitous route around the head of the Swarthbeck valley to avoid a trudge down one side of the valley and up the other. A ruined sheepfold marks the place where crossing the stream is relatively easy and the turning point in this section of the walk.

After another stretch of grassy fellside the top of Bonscale Pike is reached. The summit is marked by a rough cairn and a small collection of well made stone towers sit on the side below the summit overlooking Ullswater. The photo above was taken from as close to the towers as I was willing to go taking into account how gusty the wind was and the steepness of the grassy slope. The view is good though, I could see most of the length of Ullswater though the air wasn’t as clear as it might have been.

Leaving Bonscale Pike a grassy path, which at times was barely visible, winds its way across the gentle grassy terrain towards the summit of Loadpot Hill. The fell is a grassy one and is effectively a shallow, rounded, flat topped dome, meaning the views from the summit aren’t exactly spectacular or extensive. The high point of the fell (and my days walk) is marked by a stone trig point. 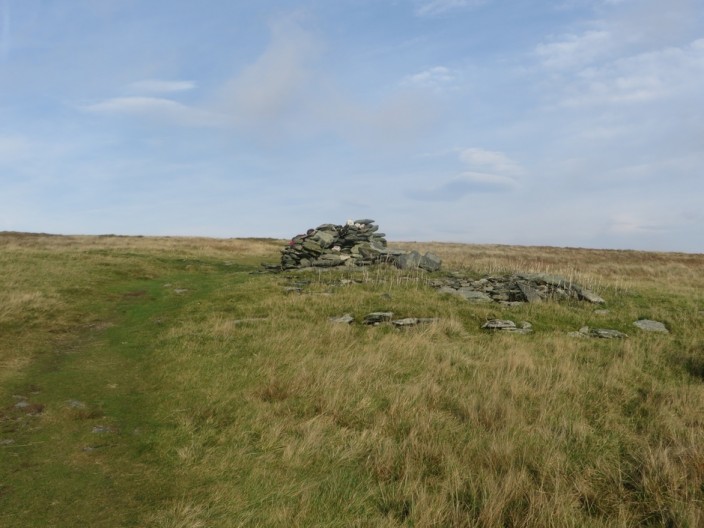 The ruin of Lowther House

To reach Wether Hill I headed south from the summit of Loadpot Hill. On my way I passed the ruin of Lowther House, a former shooting lodge. In the grassy, rounded landscape which is devoid of exposed rock pitches and stone walls the ruined building would have provided a sheltered spot for lunch had it not been for the pair of walkers who were already sheltering on the leeward side of the old chimney stack.

It didn’t take long to traverse the grassy terrain between Loadpot Hill and Wether Hill. The hill is one those in the area that the cairn marking the highest point is needed as the top of the fell is quite flat, grassy and doesn’t attract any attention or encourage greater exploration.

Leaving Wether Hill, I decided not to follow a path down to the Steel Knotts ridge, but instead made my way directly down the side of the fell towards Gowk Hill and the top of Fusedale Beck. Gowk Hill is a rounded featureless hill at the southern end of the Steel Knotts ridge. Moving on from here I again decided to cut a corner a headed straight across the fell towards the main ridge path heading towards Pikeawassa.

Brownthwaite Crag, an intermediary summit, is passed on the way to Pikewassa, it is actually higher than the latter top, but is featureless and only 12 metres higher. Pikewassa itself is a small rock outcrop at the northern end of the Steel Knotts ridge. Because the ridge has steep sides the views down to into Martindale and Fusedale are both interesting giving a birds eye view over the valley farms, and north along Ullswater.

Pikewassa was my last summit of the day but I still had a decent walk in front of me to get to Patterdale where I wanted to end the walk. First up, I descended the steep north western slope down to Martindale. The small church sits at the foot of the fell and was visible, getting ever closer for the duration of my descent to valley level.

Martindale is a pretty little valley and seemed quite popular with walkers around the area. From here I could have walked back alongside the Lake or caught a launch from Howtown back up the lake to where I started my day. This wouldn’t have made much sense though as I was spending the night in Patterdale.

From Martindale I followed a footpath across the fields at Hallin Bank and a quiet narrow road to Sandwick. From here a popular bridleway stays close to the lakeside all the way to Patterdale.

The path alongside the lake is undulating and often rough, but it did offer some interesting views across the lake. There were views of steamers plying up and down the lake, and views across the water to Glenridding the valleys behind.

Eventually the southern end of Ullswater is passed and, rather than following the road, I took what looks like a short cut across a footpath through a grass field towards Goldrill Bridge over Goldrill Beck. Arriving beside the main road the last journey of my day was a short road walk to Patterdale Youth Hostel where I was spending the night.

All in all this was a good, but long first foray into the ground to the east of Ullwater. Five fells visited, none of them really spectacular, but the higher fells I visited were perhaps less remarkable than the lower ones. The walk along the lakeside at the of the day was also a bit underwhelming, there were nice sections but it never produced a wow view or got right down by the edge of the lake. It was in summary a nice days walking which got me to Patterdale where I was to spend the night and plan for the next days outing.