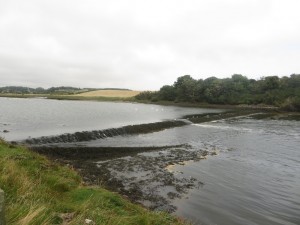 A month ago, before I ventured in to Scotland to bag my first Munro, I did something completely different and went for a walk on the Northumberland Coast. Last year I’d walked down the coast as far as Alnmouth, so this walk from Alnmouth to Amble would be new territory for me to explore.

First of all, my day didn’t start in Alnmouth. As I’d used a bus to get to start from Alnwick it made sense for me to get off in Lesbury and start the walk from there. I could have walked down to Alnmouth to walk back again, but that seemed rather pointless, especially as the weather was overcast and I’d already been to Alnmoth earlier in the summer.

After getting to Hipsburn my route was the same anyway. Here I had to walk down the side of the A1068, which it turned out was quite a busy road, so regular stops on the verge were required to avoid getting squashed by various fast moving cars.

Thankfully, soon I found myself on the segregated cycle path which follows the road between Hipsburn and Warkworth. The only dangers here were potentially speeding cyclists! The Northumberland Coast Path and St Oswald’s Way also make use of the cycle path for a stretch of about a mile to the south of Hipsburn.

After that  I picked up a track which headed towards the dunes and the beach, which was free of cyclists, and for a large part any people at all. The path follows the landward edge of the dunes though walking along the empty beach is probably a much better option which I chose not to take.

One of the less appetising sections of the route through the dunes was the caravan park to the north of Warkworth. Though I didn’t see anyone I always feel slightly uncomfortable walking through somewhere like this as I don’t like the thought of someone coming out of their caravan asking what I’m doing wandering past their door, especially if I’ve managed to get lost and take the wrong path through the park.

After passing through the caravan park I decided to take to the beach. Despite being early September the beach was almost deserted apart from a couple of dog walkers and their dogs. A mile of beach walking later I headed inland towards Warkworth where I needed to be to cross the River Coquet.

Looking upstream along the River Coquet in Warkworth

Warkworth was quite quiet with few people about and about despite me getting there in late morning. I had a brief look around the village before walking on towards Amble.

The path from Warkworth to Amble follows the utilitarian path beside the A1068. The busy roadside path is quite a contrast to the earlier part of the walk, but there isn’t much choice as the River Coquet is a few yards to the left on the other side of the fence.

The final walk in to Amble does provide you with the River Coquet for company with wildlife and the boats in the marina creating interest.

Arriving in Amble on the busy Queen Street, I decided to have a look around. The village/town has a lot of busy shops lining the street along with a few branches of national supermarkets and banks. Like Warkworth the Main Street was quieter  than I expected it to be.

At the harbour I decided the only thing I could reasonably do next was to visit a fish and chip shop and buy a portion for my lunch. I sat on a bench and enjoying the warming sun for a while before deciding I had enough time on my hands to head back to Warkworth by a circuitous route.

Leaving Amble I passed a residential street which I’m destined to live in at sometime in future, Robson’s Way!

As I had time on my hands I decided to take a longer route back to Warkworth. To do this I headed to Tughall and across some farmland and some rarely used paths.

At Tughall I noticed the sound of a combine working in a field nearby so went to investigate. I found a gap in the hedge and spotted a combine working its way around a field of wheat. The late harvest this year meant that combines were still hard at work when normally they’d be back hibernating in their sheds by the middle of September.

Leaving Tughall I found a very well made path to follow which took me all the way to Warkworth. The arable land on either side was in various states of cultivation, some fields had new crops sown in them and others were still waiting to be harvested.

At New Barns farm I spotted my second working combine of the day. This one was also in a field of wheat. By now the weather had turned from the overcast cloud at the start of the day to clear skies and sun which made ideal conditions for bringing in the crops.

After a short distance along the farm road and walk through the south end of the village I arrived at my walks end in the middle of Warkworth, which had only got a little busier in the time since I passed through earlier in the day.

Whilst waiting for the bus back to Alnwick I reflected on a nice walk, the highlight of which was probably the fish and chips by the harbour in Amble. If I do this walk again I’ll spend more time on the beach than in the dunes.