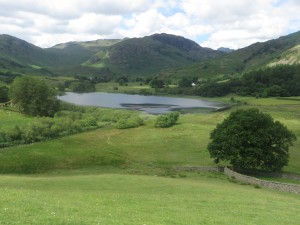 The second day of my holiday in Lakeland started with warmth and blue sky. Today I planned an unusual walk starting from Grasmere village and walking over Lingmoor Fell and a visit to the valley of Little Langdale for the first time.

The walk to Langdale

As I was staying in Grasmere overnight I decided my walk should start virtually from my bedroom door, well the centre of the village anyway by the time I’d stocked up on snacks at the Co-op in the village. To start with I walked along the quiet Red Bank lane around the west side of Grasmere lake to reach the junction with the path which would take me up and over Dow Bank.

The climb up and over Dow Bank turned out to be more strenuous than should be advised at 8:30 in the morning. Following the path up through Wyke Plantation did keep me reasonably cool temporarily, but as soon as I emerged onto the open fell it was time to de layer for the climb to the top of the ridge.

The decent into Chapel Stile was a steep one, but does offer a birds eye view of the little village as you descend steeply through bracken towards its white walls and slate roofs. Next up, crossing the valley floor offered a brief few minutes of flatness before meeting the foot of Lingmoor Fell on the other side of the valley.

The climb to the summit of Lingmoor Fell from Langdale is an interesting one with several different types of terrain passed through en route. First of all, after leaving the valley the path climbs past the site of Elterway Quarry, a scene of shattered rock and heavy machinery, rarely for the Lake District the quarry is still operational so the noise of the various machines accompanied my week day passage through the site.

Next up comes a section of walking through a peaceful woodland on the fells eastern slope. This provides some interest and hides the quarrying operations going on below. Soon enough though, I reached the end of the woodland and appeared on the open fell above. A path leads to the ridge on the fell and a wall leads from here all the way to the summit. The path beside the wall is easy to follow, but I found it equally easy to wonder off and explore some of the lumps and bumps away from the main path. One of them presented a view into the valley to the east as far as Windermere, others were equally interesting.

Soon enough I reached the summit of the only Wainwright fell I was visiting on this walk. The top is a small rocky outcrop with a little cairn to denote the top of the fell. From the top much of Langdale was visible, including Chapel Stile where I’d passed through a couple of hours earlier.

After leaving the summit I headed westwards, and for the second time on this walk, faced a steep descent. This time it was towards the gorgeous Blea Tarn, which is in view for much of the journey down the fellside to the lake. The lake nestles in the low point between Lingmoor Fell and the mass of high fells to the west and the low point between Great and Little Langdales.

As they are for much of this section of the walk the famous Langdale Pikes are visible on the northern side of the valley. Their craggy splendour gives an interesting backdrop to Blea Tarn which is lined by trees on its northern edge, adding to the interest of the scene.

After leaving Blea Tarn I headed into the delightful valley of Little Langdale. The small, green, peaceful and quiet corner of Lakeland made for a relaxing part of my walk. I crossed the valley floor and followed the path on the southern side towards Little Langdale tarn and the valley mouth.

Along the way the views were always of the green valley and farm animals were relaxing in the shade under trees. At the end of the valley I crossed the infant River Brathay via the ancient Slater Bridge. Here I passed as many people as I’d seen all day, most of them sat by the river, having their lunches.

The final stretch of my walk involved returning to Great Langdale where hopefully I’d be catching a bus back to civilisation. This involved crossing Little Langdale on the quiet country lanes of the valley and rounding the shoulder of Lingmoor Fell before retracing my steps of earlier in the day and reaching Chapel Stile again.

As I had time I added a visit to Elterwater village onto the end of the walk. This meant I followed the wide footpath which follows Great Langdale Beck for a short distance before reaching the end of my walk in the centre of the little village.

Whilst waiting for the Stagecoach 516 bus back to Ambleside at the end of the walk I sat outside the little cafe and enjoyed a cold milkshake and piece of caramel shortbread whilst reflecting on the walk. Despite being an unusual route and only including one Wainwright top it was a walk which included a variety of terrain, some splendid views of familiar and new Lake District scenery and a visit to a new to me valley.