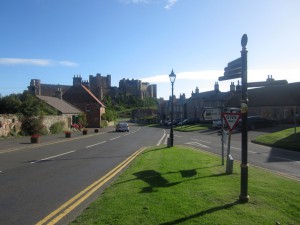 Bamburgh is a gorgeous and relatively unspoilt village which is dominated by the Castle stood on its rock with a view straight down the main street. The large number of visitors the village gets means there are several shops, cafes and restaurants for lunch or to buy a snack. I got off the bus in the centre of the village and started off by walking towards the massive edifice of Bamburgh Castle.

After heading down the street to the castle I followed the road round to the south in front of the castle.

The timber clad Armstrong Cottages date from the late 19th Century and sit on Links Road to the south of Bamburgh Castle. One of the options for walking between Bamburgh and Seahouses is to follow this road. Because there are plenty of less busy road options, cross field footpaths and the beach, this road should only really be chosen if you’re in a hurry. 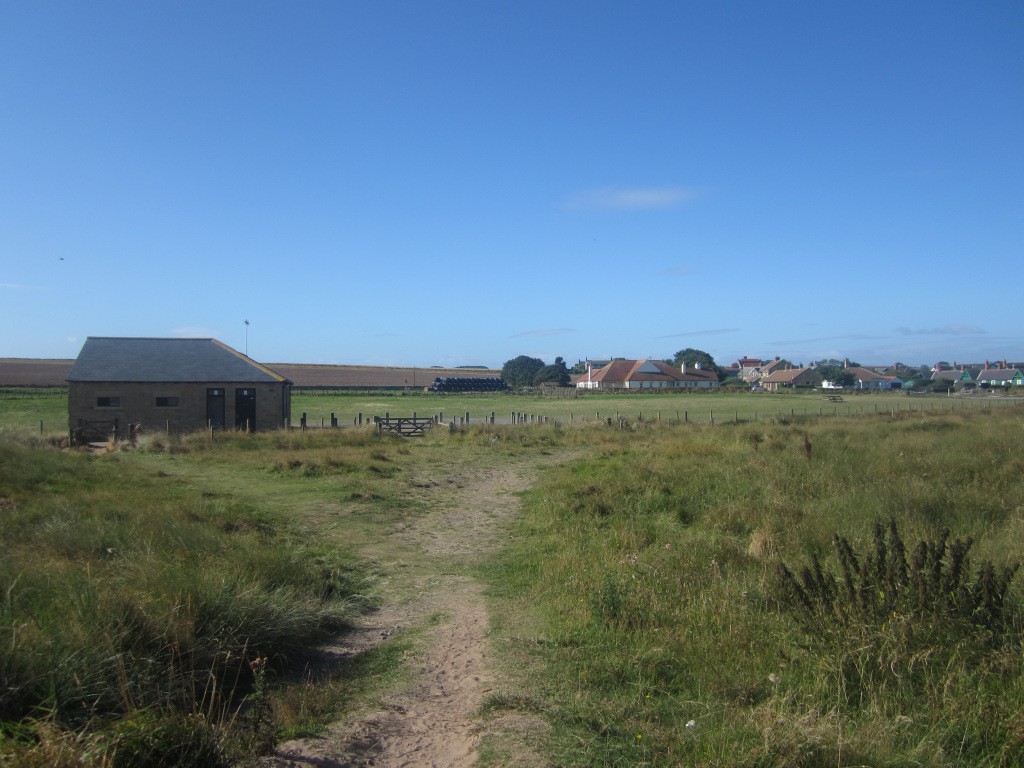 At the end of the cottages on Links Road I cut across the grassy car park which was empty, but did have (free) public toilets which were open. The path I was on crosses through a small gap in the dunes and onto the beach.

The footpath narrowed somewhat just before getting on to the beach. The white sand and blue sky give something of a tropical air to the above photo I think!

As soon as you get through the dunes and onto the beach my next objective becomes immediately visible. I could almost walk straight there across the flat beach as it turned out I’d chosen to walk around the time of low tide. I also pretty much had the beach to myself, which for early September was a bit surprising.

Two of the few other users of the beach during this stretch of my walk were the horse and rider in the above photo who passed me heading in the opposite direction in front of Monk’s House, which is one of the few made made intrusions into the dunes on the landward side of the beach. The pair had been riding in the breaking waves before cutting back onto the softer sand where they passed me.

Just before reaching Seahouses I cut up from the beach and found this path which follows the top of the cliffs which develop in front of Seahouses. Unfortunately the grass here has the wrong combination of being well used and quite uncared for and has a problem with invasive ragwort.

At the end of the beach is Seahouses. The small town, or large village depending on your view, is orientated towards tourism and marketed as “The gateway to the Farne Islands”. The centre was quite quiet when I passed through, perhaps because it was outside the height of summer.

The centre of Seahouses is marked by the war memorial in the centre of the roundabout. On this occasion I dallied with the idea of an early lunch of fish and chips, but in the end I carried on with my route and didn’t stop in the village except to pay a quick visit to the harbour.

Seahouses harbour is relatively small but during the summer is a little hive of activity being the base for tourist day trips to the Farne Islands. Bamburgh Castle, where I started my trip can be seen in the background along the coast.

To the south of Seahouses I walked along the cliff top which has a sea carved rock shelf at its foot.

To the south of Seahouses the path crosses Seahouses Golf Club and the views open up to the south across another long stretch of sand. At the end of that sand is Beadnell, my next ticking off point on my days walk.

After another stretch of walking south across a quiet, flat and secluded beach south from Seahouses I arrived at Beadnell. The village is a small settlement based around its small harbour which in modern days is mainly a home port for a small flotilla of pleasure craft. The village doesn’t have much in the way of facilities aside from a post office and a single pub, so I continued on southwards.

The beach to the south of Beadnell followed the same theme as the two stretches to the north I had already passed along and was wide, flat and empty. It also has wide sweeping views to the north and south, though from the beach itself there is virtually no view inland as it is blocked by a continuous stream of sand dunes.

Whilst walking south from Beadnell the ruin of Dunstanburgh Castle looms on the headland in the distance.

A gap in the sand dunes allowed a view back inland where the Cheviot Hills some miles away are prominent landmarks.

Eventually time was pressing so I had to head back inland to find a bus stop so I could travel back up the coast. I left the beach by a footpath which connects the coast with the road at Newton Link House. The path crossed the dunes and the bit of unkempt grassland in the photo above.

A short walk along the tarmac road brought me to the centre of the small village of High Newton-by-the-Sea which doesn’t quite have the charm of it’s near neighbour Low Newton-by-the-Sea, but it does have a bus stop which was why I was here.

I’d like to say my days walking ended with a nice cold drink in this busy looking village pub, but unfortunately it didn’t. I’d timed my walk so well (or badly) that I only had 5 minutes to wait before I had to catch the bus back up the coast, and with a bus only every 2 hours I couldn’t afford to hang around too long so gave the pub a miss.