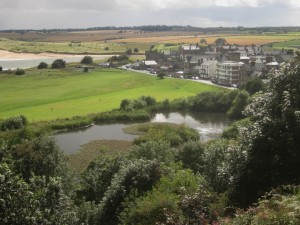 In previous walks I’ve walked down the Northumbrian coastline south from Bamburgh (read about my walk from Bamburgh to High Newton by-the-Sea here). With this walk I intended to continue exploring the coast south from Craster to Alnmouth. I followed the Northumberland Coast Path for most of way and stuck close to the coast.

The walk starts by the small harbour in Craster. The village wasn’t very busy considering it was a Saturday in late August and that the weather was fine. The Coast Path to south starts to the south of the harbour where it almost immediately finds the coastline.

Here the path clings to the narrow space between the back gardens of houses and the rocky shore. However the gardens soon give way to fields which allow a more expansive agricultural view inland.

The path sticks to the top of the low cliffs and rounds Cullernose Point. To the south of Craster the path was fairly busy with people who appeared to out for a stroll from the village. The grassy path was bounded by fields on the landward which were all arable, so there were few gates and stiles to negotiate and no livestock to be aware of.

Soon afterwards, for the first time in the walk, I left the Northumberland Coast Path and followed the country road towards Howick. Howick is a small hamlet set a couple of fields away from the coast. At one time their occupants were probably engaged by the local landlord at the nearby Howick Hall, but not now.

After Howick I cut back down to the coast passing Sea Houses farm (not to be confused with Seahouses the village), and rejoined the coastal footpath. Along this stretch of path the isolated old Bathing House is passed. This lone stone building was built by the 2nd Earl Grey to provide facilities for his family who bathed in the cold north sea. The building is now a holiday cottage from which, depending on your point of view or the weather, the views are either romantic or bleak.

Soon after passing Sea Houses an interesting feature is encountered, the “Hole in the wall” of a narrow rock outcrop at the northern end of Howick Haven. At some point the course of coastal erosion means that  the outcrop will eventually, perhaps quite soon, become a stack with a pile of rock between it from the cliff.

Progressing south, the mouth of Howick Burn is encountered. The stream has created a small beach at its point of entrance into the sea. A solid concrete footbridge carries the Northumberland Coast Path over the stream though so there’s no risk of wet feet.

After crossing Howick Burn curiosity took me on a short diversion along a footpath crossing fields towards the farm steading at Low Steads. The farmland is flat and mixed between arable land and grassland grazed by livestock. The diversion was short though and I was soon back on the coastal footpath.

At Low Stead Links there’s an emergency telephone and life ring attached to the fence at the road end. Beyond the parking area there is the wonderfully named Howdiemont Sands. The beach is only small and the rocky nature of the coastline returns soon on the way south. Shortly after a wooden footbridge crosses an unnamed burn and then a well made track is joined for the walk along the coast from here to Boulmer.

Walking towards Boulmer a row of strange and still birds are perched on the wall. These birds are not alive though, they are made out of painted scrap metal, and decorate the boundary between path and farmland.

Nearing Boulmer the rocky shoreline again turns into a sandy beach. The path briefly leaves the coast here, and follows the main (well the only) street through Boulmer. The village is a small fishing village with the houses gathered along edge of the coast. The small village has a pub and some toilets but that’s about it. A group of fishing boats hauled around on trailers pulled by rusty tractors were parked on the grass at the southern end of the village suggesting that some fragment of a fishing industry does remain in the village.

Leaving Boulmer the path finds a way through the dunes above the beach before entering what I can only describe as a labyrinth of paths, most of which are unmarked, through the private caravan park at Seaton House. I lost count of the times I emerged from a path between the dunes to find myself in front of a caravan on a patch of grass. Eventually though I did get to the other side, and here the path and the Northumberland Coast Path which uses it get as close to the sea as possible and take to the beach.

Walking on the beach means navigation is easy, though a high tide and a strong easterly wind may lead to walkers getting wet feet. Eventually the path leaves the solitude of the beach and instead of looking for beach balls I needed to start watching out for golf balls as the route cuts inland and traverses part of Alnmouth Golf Club.

The path rounds Foxton Hall, the clubhouse of Alnmouth Golf Club and crosses the fairway in front of the 18th green. Here it’s advisable to be on the lookout for flying golf balls and angry golfers. The path than follows a narrow route through bracken on the coastal dunes before reaching Alnmouth. At this point I decided to climb Diver’s Knowe, a hill overlooking Alnmouth to take in a panoramic view of the village below.

After looking down from Diver’s Knowe I continued into Alnmouth and had a brief look around the bustling village which was once a busy trading port but is now very much orientated towards tourism. Here I could have waited and caught the X18 bus back up the coast, but the northbound buses which stop in Alnmouth then go on to Alnwick, before returning to the coast and continuing north. Because of this I decided I’d walk an extra 3 miles north to Longhoughton and catch the bus north from there.

I left Alnmouth by heading north along the unclassified road toward Lesbury. Along the road an interesting view opens up of a wide meander of the River Aln around a flat patch of grassland.

After a short section of road walking a path leaves the road which heads north across arable land and avoids Lesbury. When I entered the field it had had a post harvest cultivation so the path was hard to find and the earth was sticky enough to stick to my shoes so it didn’t make for pleasant walking.

Finally after another short section of walking along the side a busy road I arrived in Longhoughton. The village has a Spar shop which is run by the NAAFI connected to the large nearby military base of RAF Boulmer which serves both the civilian and service communities. Aside from a pub the village has few other facilities and has far less of a touristy feel to it than it probably would if it had been situated a mile to the east on the coast. So it was here that my walk ended at the bus stop, waiting the bus north back up the coast.

One thought on “Craster to Alnmouth and Longhoughton”