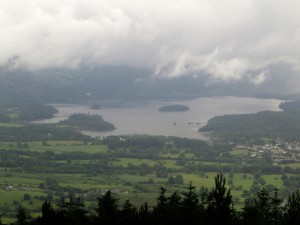 For the first venture into the fells on my week’s holiday in the Lake District I chose a route which is reasonably accessible and not too long. This route involves walking through the Forestry Commission land at Dodd Wood and up on to the fells at the “front” of Skiddaw walking from Dodd to Ullock Pike via Carl Side and Longside Edge.

Getting to the start

To get to the start point I caught the 554 Stagecoach bus from Carlisle where I had been staying the night before, prior to the start of my holiday proper. The bus stops on the side of the road at the car park for Dodd Wood, a Forestry Commission owned forest which covers the entirety of Dodd. Handily, as it turned out, there are toilets and a tea room adjacent to the car park for pre and post walk refreshments.

As the bus approached the bus stop I realised it had started raining. When I got off the bus the rain was bouncing off the road. At this point I decided the best plan of action was to run to the shelter of the veranda in front of the toilets, put on my waterproofs and assess my options. In true British style I decided that I was already there, so I may as well start my walk anyway, as surely I thought, it would brighten up later.

The route I took follows the way marked Forestry Commission route all the way to summit of Dodd. This used well made paths and tracks for much of the way so getting lost was difficult. To start with the path climbed through the trees alongside Skill Beck so the view was strictly limited to the surrounding plantation, though this did help shelter me from the worst of the rain.

Eventually the track leaves a wide track through the trees and turns right along a footpath onto the open top section of the fell which has been left un-forested. Here the view opened up showing off the view over Derwent Water and Keswick which is familiar from this corner of Lakeland. Unfortunately low cloud on the higher fells to the south meant the view didn’t really live up to its billing! A short while later I reached the top of Dodd, by this point the rain had eased off to a persistent drizzle, the type of rain which causes an ongoing internal debate about whether your hood needs to be on or off.

I left Dodd by the same track as I arrived, retracing my steps back to the forest track. Here I chose to take a direct line of attack towards Carl Side, following a vague path up the side of the hill through the heather. The top of Carlside is basically a pimple on a ridge descending Skiddaw to the south west. When I summited the Wainwright fell the top the main summit of Skiddaw was still covered in cloud as it would be for the rest of the walk. Whilst here I deliberated climbing Skiddaw, but cloud covering the summit, the threat of more rain and the challenges of walking to a bus timetable meant on this occasion I decided against it.

From Carl Side across Longside Edge to Ullock Pike is perhaps the most interesting section of the walk. The ridge is reasonably narrow with drops either side of a wide path, but cloud meant that views were limited and the drama was really limited to watching wisps of cloud blow across the ridge and wondering what the terrain was like beneath.

The top of Longside Edge is adorned with a small pile of stones forming a cairn. The walk between here and Ullock Pike was made interesting by an undulating path and cloud blowing across the ridge revealing and hiding sections further ahead. Ullock Pike summit, my last top of the day is similar in nature to Longside Edge, but the area surrounding the cairn is smaller and more eroded.

From Ullock Pike the walk was more or less downhill all the way back to the car park at Dodd Wood. The path follows The Edge down to Lin How, and then I walked back along a path through the Forestry Commission woodland beside the road. Soon after entering the woodland it started raining torrentially again. A few minutes later I passed a chap who had clearly made a wrong decision and was dashing, presumably, back to his car, wearing jeans and a polo shirt, dog running behind, absolutely soaked to the skin. I had to laugh to myself.

The end of the walk

Eventually I returned to the car park where I discovered I still had 40 minutes to wait for my bus. After peeling off my waterproofs under the veranda of the public toilets I headed into the welcoming Old Sawmill Tea Room. Here I enjoyed a hot chocolate and cheese scone whilst deciding that despite the weather I had had an enjoyable first day of my holiday in the weeks, in a relatively unchallenging, but still interesting day in the fells, despite the rain and limited views.