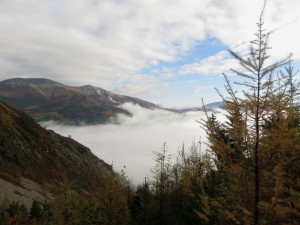 This walk was conceived with the aim of visiting the group of fells to the north of Whinlatter Pass. On the walk I  encountered memorable views, got soaked by rain, took a wrong turning in Whinlatter Forest and changed my plans half way through the walk. I visited Barf, Lord’s Seat and Whinlatter.

The day started in Keswick after getting off the 555 Stagecoach bus from Ambleside, where I had spent the night before. To get to Thornthwaite, I decided rather than hanging round for an hour for the next X5 Stagecoach service I may as well walk the extra few miles to Thornthwaite.

I left Keswick by heading along the well frequented path to Portinscale. After crossing the pedestrian footbridge over the River Derwent I left the busy path and took a quieter path beside the river heading north. The path follows the edge of the river for a couple of miles but paths to Thronthwaite and Braithwaite leave along the way, one of which I was looking for.

The path beside the river has to cross two roads. The first, the B5289, is built up on an embankment up to the rivers edge. Approaching it I initially thought I’d spotted a pedestrian underpass but closer inspection revealed it was a culvert no more than 3 feet tall. Thankfully, I spotted that the actual path climbs the embankment and crosses the road so I didn’t need to crawl through the rather wet culvert but did need to dice with traffic.

The path between the River Derwent and Thornthwaite traverses the wet, muddy and soggy grassland surrounding the appropriately named Bog House. At times the path is hard to follow, and it times it is best not to follow the path and to find an improvised line through the grass, bogs and bushes.  The early part of the walk was characterised by low cloud and dampness, which added something of an eerie feel to the farmland I was crossing.

The path eventually emerges onto the side of the A66, a road to be slightly nervous about crossing at the best of times. The low visibility, however, made the crossing even more attention grabbing than normal.

A short way to the east of Thornthwaite, the little St Mary’s Church sits alone beside Chapel Beck, which I assume takes its name from the church. I stopped to have a look around the old building and took the opportunity to plan my next moves.

Leaving Thornthwaite I followed the country road north toward Porter How. Here I joined the path which follows the Gill up the hillside towards the summit of Barf, the first objective of my day.

The path climbs very steeply beside Beckstones Gill through the trees of Thornthwaite Forest. The route is very steep but easy to follow except for a short scramble up some exposed rock. Because of recent rain, this had a veritable stream flowing down it which meant getting wet hands, and legs, and that some care was needed not to slip on the wet rock.

Eventually the path emerges from the trees and a view across Bassenthwaite towards the Skiddaw massif reveals itself above the tree tops and is framed by the sides of the ravine, on the right the trees of the forest, on the left the  steep and sparsely afforested southern flank of Barf.

Arriving at the summit of Barf the full extent of the views to the north, east and south opened up. The views would normally be excellent, especially across to the Skiddaw fells and along the length of Bassenthwaite, but the moving whisps of cloud hanging over the lake and around the edges of Skiddaw added a sense of movement and a scene that was constantly subtly changing.

After spending much more time than I had intended absorbing the view I took my obligatory photo of the summit and set my sights on Lord’s Seat, my next objective. The route to Lord’s Seat follows a fairly clear path across the bumpy fell to the summit, which is the highest point in the area.

The summit of Lord’s Seat is marked by an old fence post left in an area devoid of vegetation on the fell’s highest point. Unfortunately in the time that it took me to walk from the summit of Barf cloud descended on the summit, which meant my lunch venue had no view to speak of.

After leaving the summit of Lord’s Seat I headed south, down, and out of the cloud towards the edge of Thornthwaite Forest. I  found navigating through the forest quite tricky. The trail markers for the Forestry Commision promoted routes were quite easy to follow, but I wasn’t trying to follow a marked route and ended up taking the wrong route and backtracking more than once to find the path I wanted to lead me to the open ground on Whinlatter.

Eventually emerging out of the Forest after longer than I’d anticipated the route ahead to Whinlatter appeared. The route is a narrow path through the tussocks of grass and heather across the lumpy terrain towards the main ridge of the fell.

Eventually I found the summit, which is marked by a small cairn. This fell is one that’s perhaps only visited by people looking to bag it as its not on a direct route to anywhere else and I didn’t find the walk particularly pleasing.

The highest point of the fell, which I visited, is at eastern end of a grassy ridge, the place Wainwright refers too as the summit is at the western end of the ridge. I didn’t realise this at the time and didn’t visit the Wainwright summit.

I had planned to cross back to the north and visit Broom Fell and Graystones, but looking at my map and my watch and not fancying the idea of retracing my steps through the forest to get to the other fells I changed my plans.

my new plan involved following the stone wall down to Aiken Beck and walking back via Darling How and the Whinlatter Pass. The route following the wall is obviously used, though not by my many people, and I dare say justifiably so considering how steep my decent to the valley was.

Eventually after I negotiated the steep side of Whinlatter, the forest track was reached and I started heading towards Darling Howe and the Whinlatter Pass.

The forest track reaches the Whinlatter Pass near the isolated farm of Darling How. As I joined the road it started raining and didn’t stop until the end of the walk.  The next 2 miles walking along the Whinlatter Pass seemed like 20 miles! Wet and pretty boring it was, but the steep side of Whinlatter was also imposing on the north side of the pass.

I eventually left the pass at the Whinlatter Visitor Centre, which was quiet on a wet and miserable November afternoon.

A bridleway connects the site of the visitor centre of Whinlatter and Thornthwaite village, which was where I was ending this walk. I found the bridleway hard to follow through the forest, and was confused by the Forest Parks network of paths which seemed to have plenty of signs and waymarks, whereas with the bridleway I was following way marks seemed far harder to spot.

The bridleway follows the north side of Comb Beck for the final part of the journey back to Thornthwaite through the forest. The recent rainfall meant that there was plenty of water creating interest and noise along the length of the stream.

My walk ended when I arrived at the sturdy white bus shelter in the village. After being soaked walking back through the Whinlatter Pass I was glad of the cover the shelter provided whilst I waited for the X4 bus back to Keswick.

As it turned out the first part of the day was far more interesting and memorable than the part after Lord’s Seat. The climb up to the summit of Barf and the views from the summit were particularly memorable. Changing my plans to only cover Barf, Lord’s Seat and Whinlatter summits and getting soaked whilst walking  back along the Whinlatter Pass meant the 2nd half was quite a bit less memorable.