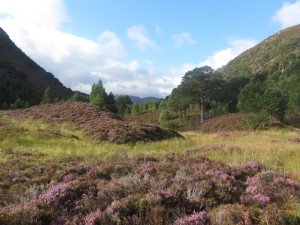 A window opened up in my calender and I decided to grab an opportunity to try something new, to bag some Scottish hills. I chose to lose my Scottish hill walking virginity by what turned out to a long route with several tricky sections but the scenery was superb and apart from on the Ryvoan Pass at the start and end of the day I didn’t see a soul, I spotted more ptarmigans than people!

The route from where I was staying at Glemore to Bynack More and Creag Mhor and back to Glenmore looked like being a long one when I planned it, and so it turned out. But it did achieve three objectives. I visited my first Munro, first Corbett and bagged some Geograph points as well.

I set off at 9am and headed east along the path which follows the minor road to Glenmore Lodge. This part of walk followed a very well made and well used path where I passed various cyclists, backpackers and other walkers who’d started earlier than me.  Accompanying the path I noticed the Allt na Feithe Duibhe flowing close by and crossed it a few times before reaching Ryvoan.

After a while the trees started to thin out and cleared patches of hillside allowed wider views across the valley. Heather abounded, and choosing to walk in September meant that most of it was flowering giving the hills and valleys an attractive purple tinge.

Soon the confines of the valley were left behind and the expansive views spread out even further. From the footpath Ryvoan Bothy is visible to the north, its roof neatly reflecting the colours of the autumn heather. The small bothy looked dwarfed by the highland landscape, but would be a very welcome port in a storm if needed.

At Ryvoan I continued along the path which will eventually take you to the Fords of Avon and Braemar if you walk far enough. The path is disappointingly wide with a man made surface, but I guess it means walking is easy and progress quick, which was welcome as I’d be using this same path on both the outward and return portions of my walk.

The River Nethy is crossed by a substantial wooden footbridge. After crossing the river here the path starts climbing the northern slopes of Bynack More and heading southwards. Here I noticed I was following a couple of walkers up ahead who I’d soon catch and pas. They were the only two people I saw between crossing this bridge on the outward leg and crossing it again on my return much later in the day.

I soon passed the pair of walkers I was following, and after they disapeared from view I didn’t see them again all day, though I did hear them at the top of Bynack More. As the path climbs up it became rougher which was welcome, after all I don’t want to feel like I could be climbing Munros in my trainers.

Unfortunately the top of Bynack More was enveloped in a shallow layer of cloud so the best view I had close to the summit was looking back down the path up the northern ridge before visibility reduced to metres instead of miles.

After a few minutes of navigating the stony exposed rocks around the top of the hill, and a reassuring check of my GPS I found the summit. Unfortunately the view from the top remained a mystery, but I had for the first time reached the summit of a Munro, should I choose to bag the rest I only have 281 to go!

After lunching in a sheltered spot near the top I headed south and discovered the Barns of Bynack, an intriguing group of weathered outcrops of rock to the south of the main summit of Bynack More. Close to the top I spotted a small group of ptarmigans perched on an exposed rock. I managed to grab a photo before they noticed me and flew off into the cloud.

From Bynack More I had a very hairy descent into the valley below. I couldn’t find the path I was looking for (if it existed) and decided on a direct route down the flank of the hill to the valley before. This nearly ended in disaster, at least once losing my footing on the steep hillside and sliding several metres down the hill before stopping in a controlled fashion. Thankfully it didn’t end in disaster, and I found myself beside Lochan a’ Bhainne.

From beside the Locchan I took a bee line up the side of the hill across the low heather and quickly reached the top of Creag Mhor. The top of the Corbett is obvious from quite a way off as it was a distinct rocky outcrop at its summit.

Standing on top of the rock outcrop at the pinnacle of Creag Mhor the views were panoramic in each of the 360 degrees available. To the south in the distance was Cairngorm, still with a couple of patches with snow in north facing corries, in the other directions a gently rolling highland landscape stretched off into the distance.

From the top of Creag Mhor I walked north over the subsidiary top of Dagrum and the rolling upland landscape to the north of Creag Mhor. Walking in this area varied from easy going across low dry heather, to navigating peat hags which were awkward and slowed progress.

Eventually I found my way to the banks of Uisge Dubh Poll a’ Choin, a small upland stream which sped my progress up as I could follow it rather than trudge through peat hags and heather. From here I followed it up its valley towards the path which I’d left some hours earlier.

Eventually I found the path again and started the trudge home along the wide and well trodden path towards Ryvoan. From here there was still nearly 2 hours of walking left, much of it downhill to return to where I started from several hours earlier in the day.

Returning along the Ryvoan Pass I stopped beside the calm, clear, green waters of An Lochan Uaine which was peaceful and quiet as evening approached. Having been on my feet for 8 hours a quick dip in the water was very tempting, however getting to journey’s end and a meal was even more tempting.  After leaving here I had a quick 30 minute walk before returning to the relative hive of activity that is Glenmore.

Once here I arrived back at my bed for the night at the Youth Hostel and reflected on a successful, rewarding and tiring first days walking in Scottish hills in which I had bagged my first ever Munro and Corbett. I also decided that I’d definitely returning to Scotland to explore more of the highland landscape in the future.