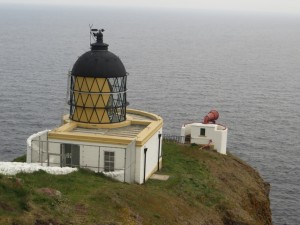 A couple of weeks ago I headed to the Berwickshire coast for a walk from Coldingham to St Abbs Head taking in St Abbs itself along the way. Spectacular coastal scenery, bird life and peace and quiet are all attractions this walk has in spades.

The walk starts in the small village Coldingham where I had arrived via Perrymans 235 bus service from Berwick. The village is small but has a few pubs and shops, including a small independent butchers where I bought I delicious but unhealthy pie to have for lunch.

Before I left I had a quick look around the grounds of the ruined Coldingham Priory, in which the villages imposing parish kirk was built. The extent of the former priory building is marked out in the grass and the church building seems worth a look inside, but on this occasion I didn’t linger.

Leaving Coldingham the best approach to St Abbs on foot is to take the Creel Path which was apparently once used by fishermen leaving in Coldingham who travelled backwards and forwards along the path to the harbour at St Abbs.

It doesn’t take long to get from Coldingham to St Abbs, where the little village, with life centred around its harbour, was busy with tourists and locals going about their weekend activities. I paused and took in the bustle for a few minutes before turning my atttention to the cliffs along the coast, where I would soon be heading.

After heading inland to avoid the need for ropes to climb the cliffs I joined a path which leaves the road signposted for St Abbs Head. The path soon finds the cliff tops where a pattern of craggy inlets, coves and bays create interest from the path. The headland at the north of Starney Bay provides a good view back to St Abbs and further down the coast.

One of the features of my walk were the very large numbers of guillemots that were huddled together like overly familiar peas in a pod on the precariously narrow and high ledges above the sea. I’m glad its them nesting there rather than me, particularly when the white staining isn’t the natural colour of rocks, rather the birds are standing on their own waste. The National Trust for Scotland who own the site counted thirty two thousand guillemots in 2013 which shows just how densely they are crammed onto the rocks along this stretch of coast.

Keeping the grass in check on the cliff top were a number of relaxed looking freshly clipped sheep. The few behind seemed to be lying on top of the small hill absorbed in the view.

Walking on along the undulating path along the coast I passed a number of patches of delicate wild flowers. Clumps of Birds Foot Trefoil and Thrift amongst the grass vied  for attention and added colour to the grassland and interest on the stretches when I couldn’t see the sea.

After more cliff top undulations have been passed St Abbs Lighthouse reveals itself, perched high on its exposed cliff above the sea. The building isn’t one of the large lighthouses that immediately impose themselves on their surroundings, but its position precariously placed on the dramatic cliff tops make up for this. The lighthouse was completed in 1862 is 68 metres above sea level according the Northern Lighthouse Board who run the light. The foghorn was installed in 1876 and was decommissioned in 1987.

Close to St Abbs Head is a car park, close to this a number of bird watchers were sat watching the colonies of guillemots (and possibly other birds) nesting on the cliffs across the cove.

After a brief pause to look at the birds I carried on to the most northerly point of the headland and found a quiet place to stop for lunch and absorb the panoramic view of the cliffs north of St Abbs Head.

One of the features of the stretch north of St Abbs Head is the set of Admiralty Measured Mile Markers that together mark out a nautical mile allowing ships at sea to gauge their speed from the time it takes to pass between the sets of markers.

This path along this part of the coast is both undulating and circuitous as it tries to follow the edge of the cliffs whilst also having to deal with practicalities such as crossing streams, dry stone walls and avoiding vertiginous coves and cliffs.

The path continues in meandering fashion along the coast, so much so that I found the path surprisingly energy sapping considering its coastal nature. It also takes much longer to walk between the southern and northern ends of the Measured Mile than the name would suggest.

After what felt like far too long I reached the northern end of the Measured Mile, marked by its two metal poles on the cliff top. Before I reached them I left the coast for the last time on the days walk and negotiated a fence topped with barbed wire. My next action was to head across the grassland in the direction of Lumsdaine. This involved crossing a large field of grass occupied by a flock of ewes with their lambs and finding a farm track which took me to the steading.

Approaching the steading I passed a paddock containing a trio of very large bulls. Thankfullymy  route didn’t pass through the paddock otherwise a change of direction may have been required.

For the final stretch of the walk back to Coldingham tarmac is the only material underfoot. It makes route finding easy and the going is quick, but its not exactly scenic. Because its straight it is much quicker than turning around and heading back down the coast though, but I did yearn for just a bit of coastal scenery to lighten up the trudge back to the village.

Perhaps my least favourite part of the walk was the short section of walking alongside the A1107. Fast traffic (albeit not much) and no pavement didn’t make the section enjoyable at all, but it was  thankfully relatively short, and soon I’d arrived back in safety of the village and its pavements.

Four hours afters I set out I arrived back at where I started, the bus stop in the centre of Coldingham. Unfortunately, because I’d underestimated just how much time the coastal undulations along the length of the Measured Mile would take to negotiate, I didn’t have time for a visit to the pub and instead had to settle for a drink of water during the short wait for the bus back to Berwick at the end of the walk.