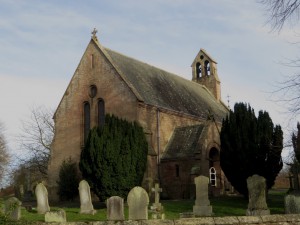 With itchy feet from not having not been out at all in January I decided that something needed to be done. Short of inspiration I looked for a route through countryside that would connect a few small villages together. I often see signposts for Lucker off the A1 at Warenford and have wondered what was there. This walk from Bamburgh to Belford would enable me to find out.

The walk started in Bamburgh at the slightly tardy hour of 11 o’clock after arriving via an Arriva X18 bus to the coast. Once in Bamburgh I took an obligatory photo of the castle  and bought part of my lunch from the lovely little butchers in the village.

I left the village by the handily named Lucker Road, a reasonably busy B road, which I wasn’t going to using to reach Lucker.

After a short walk along the B road I turned left onto a muddy bridleway which traverses farm land until reaching the country road close to the farm at Burton. It meant walking a longer route, but at least there was no traffic.

The bridleway provides a view to the south of the farm buildings at Burton across the fields. Also passed on the bridleway is “The Cottage”, which happens to be as single, lonely cottage.

On reaching the country road at Burton curiosity took me to the converted farm buildings at Glororum. I then returned to Burton where I joined another bridleway. This one follows the margin between an arable field which had recently been ploughed and a hedgerow.

From the bridleway a sturdy looking limekiln sits on the hillside and a large farm shed sits close by on the edge of a flat arable field.

This newly planted strip woodland sits beside the bridleway. I wonder who Jim is?

Shortly after  the bridleway meets Lucker Road again which meant I had to utilise tarmac again. This involved a short section on the main road and a longer length of a quiet lane towards the settlement at Bradford.

Bradford is little more than a group of roadside cottages and some farm buildings. The block of stone farm buildings nearest the stream appear to be derelict and probably awaiting conversion into houses or holiday cottages at some point in the future.

From Bradford I took a footpath across farmland towards Lucker. The path, which doesn’t appear very well used, follows the edge of a couple of arable fields before crossing the B road again near Hoppen Hall.

After crossing the B1341, the path crosses a grass field which was being grazed by a flock of sheep. The steading of Hoppen Hall stands out on top a small hill in the distance.

From this field you can see a pretty little bridge which carries the main Bamburgh to Lucker road across the Waren Burn on the northern edge of the field. The bridge has quite intricate circular lattice metal work parapets which surprised me a little as small, rural bridges tend to be more utilitarian in their design.

The path then makes use of an underpass to cross the East Coast Mainline. The path probably originally climbed the embankment and crossed the tracks, but in the pursuit of safety a metal structure was inserted into the underpass through which the Waren Burn flows to allow the path to cross the line more safely.

In the woodland on the other side a few clumps of snowdrops were flowering in amongst the leaf litter and other vegetation on the ground which I think is a sign that spring is on its way.

Shortly afterwards I found myself Lucker. The village is a fairly small one which appears to have lots of holiday lets. There are no facilities to speak of excepting the village pub which appeared to be closed. The only sign of life was at the former village nursery (and probably originally a school) where a couple of builders were working. The building is being converted into a bistro.

The war memorial is situated in the centre of a road junction towards the north of the village. This may have made sense 100 years ago, but probably doesn’t now. Behind the memorial is currently a large building site. The grounds of the derelict Lucker Hall are being redeveloped into a site containing 40 holiday lets. Whilst I’m all for the redevelopment of derelict sites such as this I can’t help but think that 40 properties is probably an over development of the site and will have and adverse impact on the rest of the village.

There isn’t a direct route between Lucker and Belford, the nearest thing being the A1, which is somewhere I really don’t want to be walking. To get to Belford I did have to find a sensible way of crossing it though.  To this end I headed north towards Adderstone Lowmill farm, my aim being to cross the A1 south of Mousen farm. 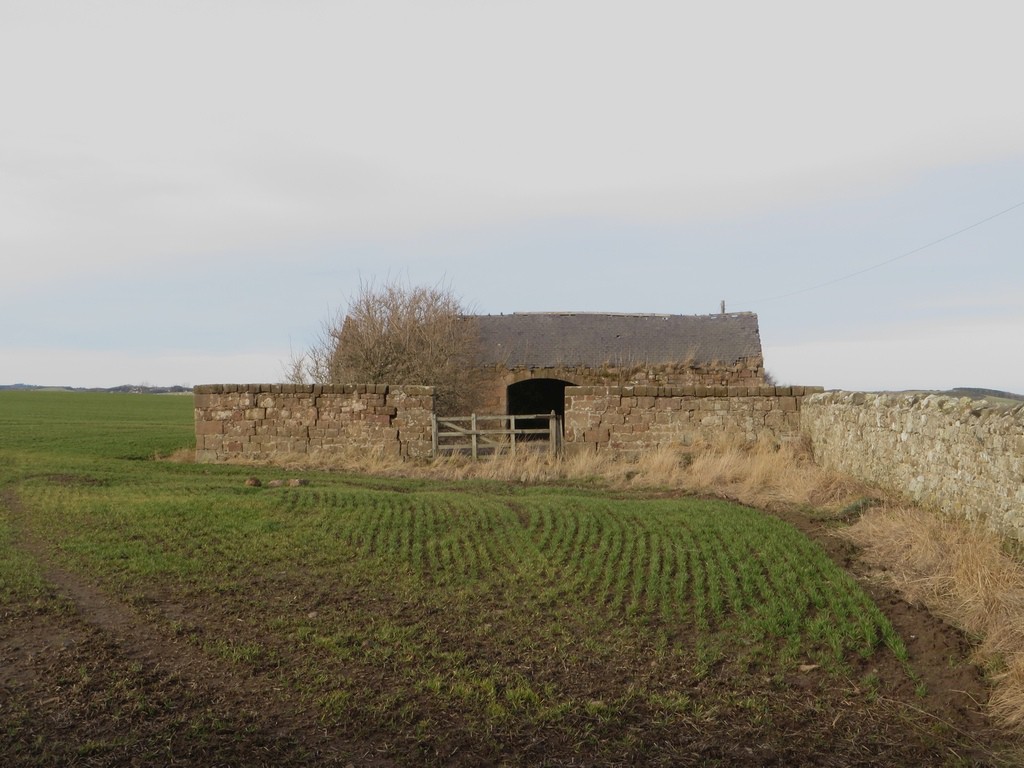 A derelict stone barn beside the track west of Adderstone Lowmill

After passing through Lowmill I headed west along a grassy track looking for a path to follow between here and Adderstone Mains which it turned out isn’t signposted, but once I’d spotted it it was easy going following the grassy margin of an arable field.

After negotiating the path around the boundary of the large house at Adderstone Mains and a short walk down the farm lane the time had come to cross the A1. Thankfully I only had to walk a hundred yards along the verge before I crossed over and found the footpath which would take me away from the busy road.

The footpath heads away from the A1 through a woodland, and fortunately it seems reasonably well used, which meant I didn’t have to fight through undergrowth and branches to make progress.

After a stretch of walking along the quiet road west of Old Mousen I came to a gateway in the corner of a woodland where I would leave the road for a footpath which leads all the way to Belford. First of all though I had to negotiate a young plantation with plenty of branches at head height trying to catch me unaware.

The path to Belford crosses a variety of farmland, including grass and arable fields, along footpaths which follow the edge of the fields. The only muddy sections to speak of were the two sections passing through the woods along the path. At South Meadows a big grass field beside the path was occupied by a large number of free range chickens which were out and about pecking here and there and enjoying the sunny afternoon and relative freedom of the field.

The final stretch of the path got increasingly muddy as as it got closer to the village. Right on the edge of the village the path passed a building site were new houses were being constructed. It’s quite possible that at some point in the future all the field in the foreground will also be houses.

The walk ended as I arrived back in Belford, several hours after I had left on the bus to Bamburgh. The village centre was quiet as I completed my walk and reflected on a day spent walking around a small part of Northumberland’s farmland.